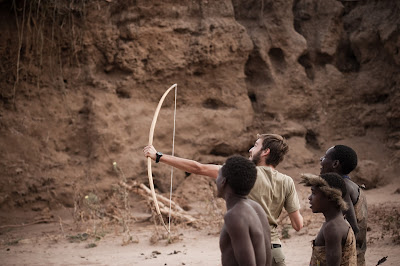 If you have wondered what hunting with the Hadzabe hunter-gatherer tribe in Tanzania was like, then this article will not only take you through the penultimate experience into the cradle of humanity itself, it will show you on one level, how our relationship with food—or more accurately, with our ancestors and what might be the oldest food story in the world—that began in the large woodlands Savannahs east and south of the impressive Lake Eyasi… a beautiful soda lake that’s part of the Great Rift Valley of East Africa, where a small group of hunter gatherers live and exist today in exactly the same way they did over forty thousand years ago.

The Hadza are a population of just over a thousand people who survive on berry fruit, baobab tree fruit, honey, porcupine and other wild animals. They do not grow anything; don’t farm; and don’t keep poultry, or animals of any kind for subsistence. But what makes this tribe particularly interesting, is the revolutionary idea that this small group of people could be so crucial to the future of the whole human race. Professor of genetics, Tim Specter, believes the gut microbiome found in the Hadza population hold the key to the nutritional equivalent of the missing link.

The more you look at 40,000 to 50,000 years before obesity and diabetes, the more you’ll appreciate the absence of 21st century diseases in the Hadza population being directly linked to their diet and way of life that has existed and continues to exist for over fifty thousand years. A safari adventure into the footsteps of our ancestors, therefore, is perhaps the most fascinating experience you’ll ever have.

On a Hadza hunting expedition, expect an early morning rise when it is still dark, followed by a short Land Rover drive to the Hadza’s overnight camp. You’ll arrive at the crack of dawn to perhaps find a circle of men and boys sitting around a fire; most of whom would be silently gazing into the fire as they hand around a pipe, taking long, deep drags from it. They’ll be preparing arrows, checking their quills and placing them into quivers. A morning snack-hunt would involve hunting small animals. Don’t expect to go out on a big animal hunt with them, because it can be dangerous. The wounds you’ll likely sustain from an injured buffalo or baboon can be serious for the slow and uninitiated hunter.

That being said, you’re going to be surprised to find how exhilarating the thrill of the chase can be for you, even when you’ll likely find it rather impossible to keep up with the Hadza who seem to move like phantoms in the bush. If you’re the kind of person that wants to discover the thrill of the hunt with one of the last remaining hunter-gatherer tribes in the world, then a hunting safari with the Hadzabe is exactly what you’re looking for. So get ready to run through the scrub land; and to dodge low-hanging branches, thorny bushes and jump ditches, in an effort to keep up with the Hadza.

About the Author: Anthony J. Namata is a creative travel writer who blogs at Blockbuster-Articles.com, and writes exclusively for tour operators on safari destination Tanzania. For more information on booking a Hadzabe hunting safari in Tanzania, visit: www.travelpartners.co.tz

Posted by Creative Spinner at 5:39 AM