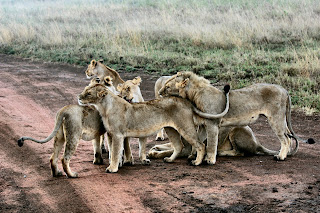 The Cradle of Mankind is an important prehistoric site in Tanzania’s Olduvai Gorge. If like me you’re intrigued by the story of the evolution of mankind, Olduvai Gorge, a designated World Heritage site by UNESCO in 1979 for its outstanding ecological and geological value, is the one place on earth steeped in layers of prehistoric finds dating as far back as 2.6 million years. A steep-sided ravine in the Great Rift Valley, the Olduvai Gorge stretches through eastern Africa and has been instrumental in furthering understanding of early human evolution. This article will look at the evolution of humankind and what you can expect to see in a touristic setting.

Wilhelm Kattwinkel, a German entomologist, whilst chasing a fancy butterfly in the green wilds of Tanganyika, tumbled off a rocky ledge and found himself in an anthropologist's dream world: an erosion-created rift with layer after layer of fossils, bones and ancient artifacts. The find was named Olduvai Gorge, derived from the Masaai word Oldupai, which is the local name of the wild sisal plant that grows in the area. The name Olduvai was ultimately adopted as the official name in 2005. Pioneered by Louis and Mary Leakey, excavation began in 1931 and continued into the 21st century.
As a tourist, you will be visiting a site that millions of years ago, was a large lake, the sides of which were covered with layers of volcanic ash. 500,000 years ago, seismic activity diverted a nearby stream which, over time, cut into the sediments to expose seven layers in the walls of the gorge.

These layers revealed tools from 2.6 million years ago; bones of primitive huminid forms (not of modern humans); evidence of elephant consumption, based on a nearly complete skeleton of extinct Elephas Recki on bed six along with stone tools such as choppers and flakes, and large numbers of smaller animals found with it clearly identify this particular area (FLK North) as an early butchering site. Beds three and four have produced Acheulean tools and fossil bones from over 600,000 years ago. The amount of history embedded in these layers of rock captures the imagination and provides a glimpse at the evolution of humankind.

If only for the thrill of walking along the footpaths of these immensely important discoveries, the Olduvai Gorge experience is likely to fulfill your desire to experience the historical evolution of man. There is a museum on site; lodges and camping sites in the vicinity; and organized tours of the area available to the tourist. Consult your tour operator to plan an unforgettable trip to the Olduvai Gorge and for detailed information on how to make the most of your safari. Tanzania’s northern circuit is usually quite busy, especially during high season, so it is always advisable to plan your trip considerably ahead of time. Reading about how we humans evolved from the history books is one thing, but actually setting foot on the grounds our forbears trod and through which they evolved to what we are today is quite another. A tour of the great Olduvai Gorge is the one place on earth where generations of our evolution is safely embedded.

About the Author: Anthony J. Namata is a creative travel writer who blogs at Blockbuster-Articles.com, and writes exclusively for tour operators on safari destination Tanzania.

Posted by Creative Spinner at 8:23 AM