Uncover the Lake Natron Mystery that Turns Animals to Stone 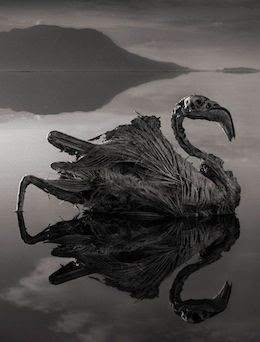 One of Africa’s most serene lakes has become the source of perhaps the most phantasmagorical photographs ever captured—images that depict living animals instantly turned to stone. What is responsible for this is the alkaline water in Lake Natron, whose PH is as high as 10.5 and is so caustic it can burn the skin and eyes of animals that aren't adapted to it. This article will look at one of the two alkaline lakes in East Africa—Lake Natron; the other is Lake Bahi. Both these lakes are fed by hot springs and small rivers, and do not drain out to any river or sea. They are basically shallow lakes in a very hot climate, with water temperatures as high as 106 degrees Fahrenheit (41 degrees Celsius).

The alkalinity of the water comes from the sodium carbonate and other minerals that flow into the lake from the surrounding hills. You’re going to be surprised to discover that deposits of sodium carbonate, once used in Egyptian mummification, are what act as a preservative for those animals unlucky enough to die in the waters of Lake Natron.

Some misleading media reports suggest that the animals die after coming into contact with the lake's water. This is untrue, however. The fact is Lake Natron's alkaline waters support a thriving ecosystem comprising freshwater wetlands, salt marshes, flamingos and other wetland birds, tilapia and the algae on which large flocks of flamingos feed. Haunting images of the lake and its dead have been captured by photographer Nick Brandt, and published in a book titled "Across the Ravaged Land."
Brandt discovered the remains of flamingos and other animals with chalky sodium carbonate deposits outlining their bodies in sharp relief. "I unexpectedly found the creatures — all manner of birds and bats — washed up along the shoreline of Lake Natron," Brandt wrote in his book. "No one knows for certain exactly how they die, but … the water has an extremely high soda and salt content, so high that it would strip the ink off my Kodak film boxes within a few seconds."

"I took these creatures as I found them on the shoreline, and then placed them in 'living' positions, bringing them back to 'life,' as it were," Brandt wrote, referring to how he repositioned the animals, to bring them back to life again in death.

If you want to enjoy the beauty of Lake Natron, the breeding season, where more than 2 million flamingos use the shallow lake as their primary breeding ground, would be an ideal time to visit. You’ll also get to see the flamingos' nests, which are built on small islands that form in the lake during the dry season. The view is breathtaking, and photography opportunities are simply magnificent.

About the Author: Anthony J. Namata is a creative travel writer who blogs at Blockbuster-Articles.com, and writes exclusively for tour operators on safari destination Tanzania. For more information on booking a safari to the mysterious Lake Natron in Tanzania, visit: www.travelpartners.co.tz

Posted by Creative Spinner at 5:43 AM